her life and works 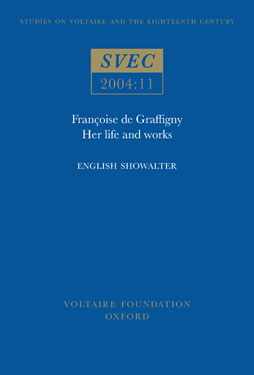 The story of Françoise de Graffigny’s life reads like a novel. Following a disastrous marriage, she was forced by political upheavals to leave her native Lorraine and move to Paris, where she struggled to survive against poverty and persecution. Here she made her way into the heart of literary society in the heyday of the Enlightenment, wrote a novel – the Lettres d’une Péruvienne (1747) – that made her an international celebrity, wrote a play – Cénie (1750) – that ranked among the ten most successful new plays of the century, and became a noted salon hostess. Yet fifty years after her death she was almost forgotten, and has been rediscovered only in the last few decades. Now her novel is widely read once more, and studied as a masterpiece. At the same time, a vast collection of her letters and papers emerged, and scholars have used the ongoing edition of her Correspondance to shed important light on a long list of noted figures, such as Choiseul, Crébillon fils, Duclos, Helvétius, Palissot, Prévost, Rousseau, and Voltaire.

This biography draws on those letters, including the hundreds not yet published, and on the editorial team’s highly praised research, to provide the first biography in ninety years of this phenomenal woman. It provides new material on all aspects of her life, from her intimate feelings to the composition and publication of her literary works. It is by far the most complete and accurate account of Mme de Graffigny’s life and times.

List of illustrations
Acknowledgements
List of abbreviations
Introduction
1. A childhood in Lorraine
2. Marriage and widowhood
3. From Lunéville to Paris
4. Paris and the duchesse de Richelieu
5. Alone in Paris
6. A room of her own
7. Back from the brink of failure
8. Becoming a writer
9. Lettres d’une Péruvienne
10. The rewards of fame
11. Changes and endings
12. Mentor and author
13. Cénie
14. Minette and Helvétius
15. The salon of Mme de Graffigny
16. After Cénie, author and mentor
17. Devaux
18. Mme de Graffigny’s last year
19. Posterity
List of works cited
Index

This is a very good book, thoroughly researched and admirably well written.

It is impossible to separate Graffigny’s life (and thus her biography) from her correspondenccec, but in its quotidian minutiae, a correspondence, even one as personal, rich and continuous as Graffigny’s, cannot present a coherent overview. With his intimate knowledge of all her writings, Showalter provides the necessary perspective. His biography navigates through the correspondence and other documents to give shape and direction to Graffigny’s life, highlighting how her struggle for independence paralleled her development as an author and how her social gifts for forming friendships and intellectual bonds with many of the period’s renowned authors, philosophes, and playwrights helped her create the network and support crucial to succeed as a writer, a dramatist and a salonnière