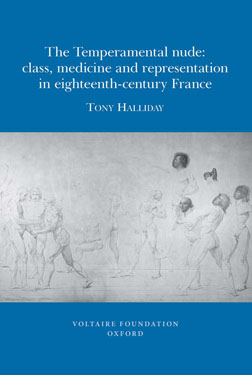 Although discredited by seventeenth-century scientists, temperament theory – which attributed human moods to the interaction of four distinct bodily fluids or ‘humours’ – was refashioned a century later to create a moral and physiological typology of social classes. This revival was the work of leading physiologists of the time, but the impact of their thinking extended far beyond medicine to embrace the history of ideas and, in particular, the representation of the human body in art.

In this richly-illustrated book, Tony Halliday argues that matters of artistic representation were closely connected to medical and political discourses throughout the later eighteenth century, especially during the successive phases of the French Revolution. He explores the effects of the reworked theory of humours on visual representation, focusing on:
• the interaction of art and politics in debates about the visual portrayal of the ‘new citizen’
• Antique notions of an ideal body and their transformation in contemporary art
• the concept of a new ‘muscular’ temperament, and its social, political and artistic implications
• the impact of certain works of art such as Bouchardon’s statue of Cupid fashioning a bow from the club of Hercules and the unease they revealed in late eighteenth-century Europe about the relationship of character, appearance and occupation.

Introduction
1. The natural order
2. The labour of love
3. Temperament and the body
4. Temperament and the ideal: ancient and modern
5. The citizen body: the politics of abstraction
6. A body one and indivisible: Jacobin representations of the people
7. The labels of Hercules: representing the body after Thermidor
8. The trouble with Tatius: David’s Sabines and the end of public art
Bibliography
Index

In eight abundantly illustrated chapters, Tony Halliday endeavours to revisit and revise the lines along which to read the medical and sociopolitical discourse as well as the motif of the male nude in eighteenth-century French art.