Epicurus in the Enlightenment 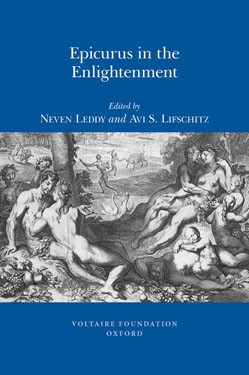 Eighteenth-century Epicureanism is often viewed as radical, anti-religious and politically dangerous. But to what extent does this simplify the ancient philosophy and underestimate its significance in Enlightenment writing?

Through a pan-European analysis of Enlightenment centres from Scotland to Russia via the Netherlands, France and Germany, contributors argue that elements of classical Epicureanism were appropriated by radical and conservative writers alike. They move beyond literature and political theory to examine the application of Epicurean ideas in domains as diverse as physics, natural law, and the philosophy of language, drawing on the work of both major figures (Diderot, Hélvetius, Smith and Hume) and of lesser-known but equally influential thinkers (Johann Jacob Schmauss and Dmitrii Anichkov). This unique collaboration, bringing together historians, philosophers, political scientists and literary scholars, provides rich and varied insights into the different strategic uses of Epicureanism in the eighteenth century.

Neven Leddy and Avi S. Lifschitz, Epicurus in the Enlightenment: an introduction

Hans W. Blom, The Epicurean motif in Dutch notions of sociability in the seventeenth century

Thomas Ahnert, Epicureanism and the transformation of natural law in the early German Enlightenment

James A. Harris, The Epicurean in Hume

Avi S. Lifschitz, The Enlightenment revival of the Epicurean history of language and civilisation

This excellent collection of essays revisits Epicureanism in its various associations with Enlightenment throughout Europe and as far as Russia. […] part of the pleasure of the volume comes from the way it continually moves between examining local contexts and asking large questions.