Theatre and the novel, from Behn to Fielding 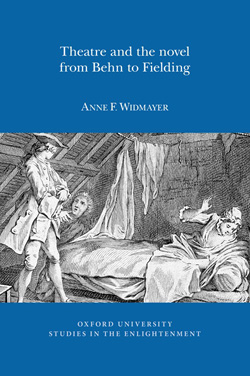 Ever since Ian Watt’s The Rise of the novel (1957), many critics have argued that a constitutive element of the early ‘novel’ is its embrace of realism. Anne F. Widmayer contends, however, that Restoration and early eighteenth-century prose narratives employ techniques that distance the reading audience from an illusion of reality; irony, hypocrisy, and characters who are knowingly acting for an audience are privileged, highlighting the artificial and false in fictional works.

Focusing on the works of four celebrated playwright-novelists, Widmayer explores how the increased interiority of their prose characters is ridiculed by the use of techniques drawn from the theatre to throw into doubt the novel’s ability to portray an unmediated ‘reality’. Aphra Behn’s dramatic techniques question the reliability of female narrators, while Delarivier Manley undermines the impact of women’s passionate anger by suggesting the self-consciousness of their performances. In his later drama, William Congreve subverts the character of the apparently objective critic that is recurrent in his prose work, whilst Henry Fielding uses the figure of the satirical writer in his rehearsal plays to mock the novelist’s aspiration to control the way a reader reads the text. Through analysing how these writers satirize the reading public’s desire for clear distinctions between truth and illusion, Anne F. Widmayer also highlights the equally fluid boundaries between prose fiction and drama.

Papers on Language and Literature

‘One of the most interesting aspects of Widmayer’s study is her focus on the use of stage space by the four authors [Behn, Nanley, Fielding, Congreve] (…) but to different effects.’